Automatic vacation of stay granted by ITAT after expiry of 365 days is unconstitutional: SC 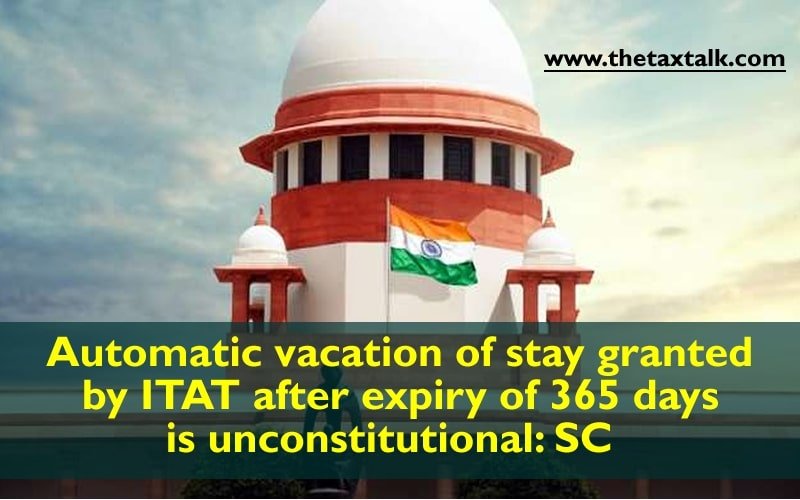 Automatic vacation of stay granted by ITAT after expiry of 365 days is unconstitutional: SC

Assessee-Pepsi Foods Ltd. was engaged in the business of manufacture and sale of concentrates, fruit juices, processing of rice and trading of goods for exports.
It merged Pepsico India Holdings Pvt. Ltd. in terms of a scheme of arrangement duly approved by the Punjab and Haryana High Court.
For the assessment year 2008-2009, Assessing Officer (AO) passed final assessment order which was adverse to the assessee. On 31-05-2013, a stay of the operation of the order of AO was granted by the Tribunal for a period of 6 months.
This stay was extended till 08.01.2014 and continued being extended until 28.05.2014.
Since the period of 365 days as provided in Section 254(2A) of the Income Tax Act was to end on 30.05.2014 beyond which no further extension could be granted, the assessee filed a writ petition before the Delhi High Court challenging the constitutional validity of the third proviso to Section 254(2A).
The Delhi High Court struck down that part of the third proviso to Section 254(2A). Aggrieved-revenue filed the appeal before the Supreme Court.
The Supreme Court of India held the object of the third proviso to Section 254(2A) is automatic vacation of a stay that has been granted on the completion of 365 days.
This automatic vacation is granted even if assessee is not responsible for the delay caused in hearing the appeal. Such object being discriminatory and is liable to be struck down as violating Article 14 of the Constitution of India.
Also, the said proviso would result in the automatic vacation even if the Appellate Tribunal could not take up the appeal in time for no fault of the assessee.
Further, vacation of stay in favour of the revenue would ensue even if the revenue is itself responsible for the delay in hearing the appeal.
In this sense, the said proviso is also manifestly arbitrary being a provision that is capricious, irrational and disproportionate so far as the assessee is concerned.
Thus, the third proviso to Section 254(2A) will now be read without the word “even” and the words “is not” after the words “delay in disposing of the appeal”.
Any order of stay shall stand vacated after the expiry of the period or periods mentioned in the Section only if the delay in disposing of the appeal is attributable to the assessee.
Tags: Automatic vacation of stay granted by ITAT after expiry of 365 days is unconstitutional: SC