Assessee not liable to pay Income Tax as property belongs to HUF of Assessee and not individual: ITAT 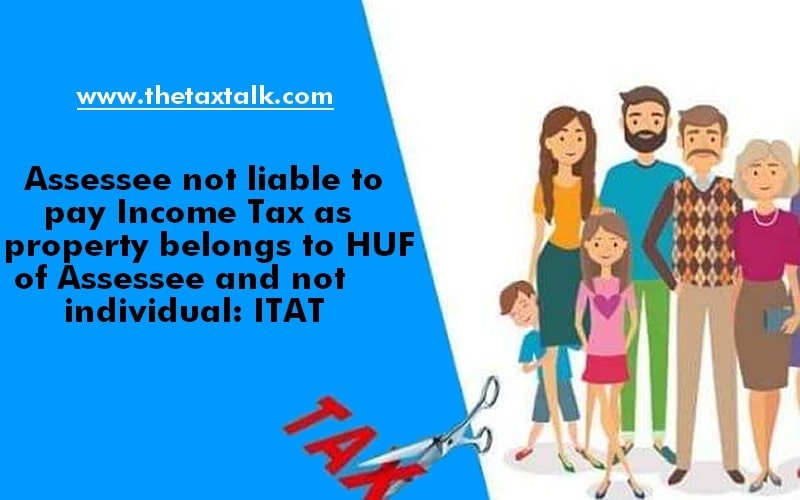 Assessee not liable to pay Income Tax as property belongs to HUF of Assessee and not individual: ITAT

The Assessing Officer having jurisdiction over the assessee, Alugaddala Kistaiah had received information that the assessee individual has sold property vide document No.457/2009 for a consideration of Rs.32,21,000/- during the financial year relevant to A.Y 2010-11 whereas the fair market value of the property as per Stamp Valuation Authority was Rs.43,80,000/-.

Since the assessee had not filed his return of income, the Assessing Officer believed that income chargeable to tax has escaped assessment.

Thus, the Assessing Officer issued notice u/s 148 of the Act.

During the course of reassessment proceedings, the assessee filed computation of capital gains projecting loss on sale of the property.

The documents pertaining to the property were called for from the assessee and also from the Land Registration Authorities u/s 133(6) of the Act.

The Assessing Officer observed that the document No.457/2009 was registered on 8.4.2009 with regard to the sale of property in question and that till 28.1.2009, only leasehold rights were with the assessee.

He observed that the assessee had acquired lease rights over the property on 30.6.1950 by virtue of Settlement and Arrangement deed dated 30.06.1950 and consequent to the demise of his father in the year 1955, the assessee, his mother and two sisters were left behind as heirs and legal representatives.

Accordingly, the Estate Officer has converted the leasehold rights to free hold rights in favour of the assessee for a consideration of a sum of Rs.50,400/-.

Therefore, he held that capital gain arising on a/c of the sale was Short Term Capital Gain.

The Assessing Officer also observed that only other expenditure incurred by the assessee in connection with the transfer of the land was the fee paid by him for conversion of leasehold rights into freehold right which is to the tune of Rs.3,07,439/- which was paid on 19.01.2009.

Accordingly, he allowed the same and after applying the provisions of section 50C of the Act, he computed the short- term capital gain at Rs.40,72,561/- and brought it to tax.

Mr. Vishal Gupta Vakkalagadda, the Counsel for the assessee highlighted the sale deed/conveyance deed dated April 8, 2009 to demonstrate that the assessee had acquired property from his father in 1955 i.e. even prior to the promulgation of the Hindu Succession Act in 1956.

Mr. Gupta submitted that since the assessee was a male Hindu and had inherited the property prior to coming into force of Hindu Succession Act 1956, automatically he became a member of HUF and accordingly the property of the assessee has become HUF property and it continued to be so till it was transferred by way of agreement of sale and thereafter execution of sale deed dated 8.4.2009.

In the case before me clearly, the property was inherited by the father of the assessee in 1952 and was also conveyed to the assessee after the death of his father in 1955, i.e. before coming into force of Hindu Succession Act, 1950.

The Income Tax Appellate Tribunal(ITAT), Hyderabad Bench quashed the assessment order as property belongs to the HUF of assessee and not to the assessee individual.

Tags: Assessee not liable to pay Income Tax as property belongs to HUF of Assessee and not individual: ITAT