Assessee is liable to TDS on LTC allowance even if it comes to know about foreign travel by employees only at time of reimbursement of bills: ITAT 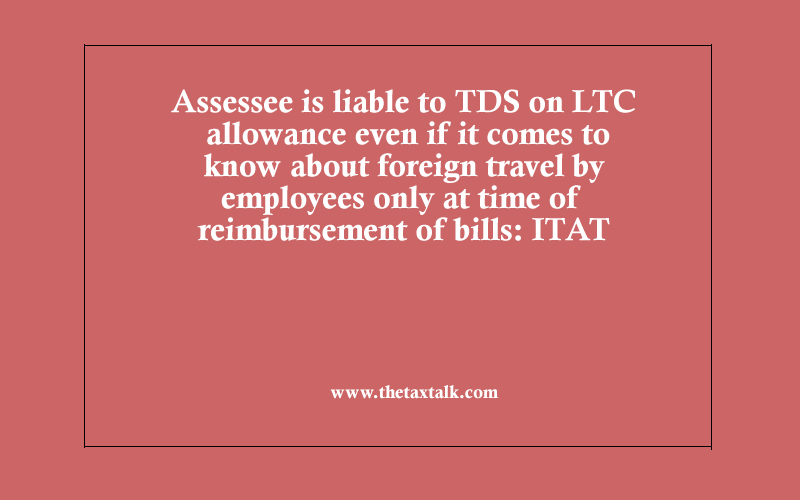 Assessee is liable to TDS on LTC allowance even if it comes to know about foreign travel by employees only at time of reimbursement of bills: ITAT

BENGALURU,   THE ISSUE IS – Whether Bank is liable to TDS on LTC allowance granted to its employees if it is used for foreign trip and the assessee comes to know about it only at the time of reimbursement of bills. YES IS THE ANSWER.

The TDS officer conducted the survey proceedings in the business of the assessee bank. During the course of survey proceedings, the TDS officer noticed that the assessee had not deducted tax at source on LTC allowance granted by it to its employees, though the amount of allowance was not exempt u/s 10(5) of the Act. According to the TDS officer, the amount of LTC allowance was not exempt because the place of destination was not within India. The submission of assessee was that the employees who intend to avail LTC submits the claim in the prescribed Form declaring designated place of visit which was within India. However, the employee may undertook the tour to place outside. The reimbursement made by the assessee include the travel cost towards both Indian and foreign travel. However, the TDS officer was not satisfied with explanation of assessee and held the assessee as ‘the assessee in default’ for not deducting tax at source on LTC allowance and passed order u/s 201(1) of the Act and demanding tax on such allowance along with interest u/s 201(1A) of the Act. On appeal, CIT(A) confirmed the action of the TDS officer.

++ issue of non deduction of tax at source on LTC allowance is covered against the assessee-bank by the decision of the co-ordinate bench (Bangalore) of the Tribunal in the case of Syndicate Bank vs. Asst.CIT(TDS), wherein, following the decision of the co-ordinate bench (Lucknow) of Tribunal in the case of SBI vs. Dy.CIT it was held that “the assessee may not be aware with the ultimate plan of travel of its employees, but at the time of settlement of the LTC/LFC bills, complete facts are available before the assessee as to where the employees have travelled, for which, he has raised the claim; meaning thereby the assessee was aware of the fact that its employees have travelled in foreign countries, for which, he is not entitled for exemption u/s. 10(5) of the Act. Thus, the payment made to its employees is chargeable to tax and in that situation, the assessee is under obligation to deduct TDS on such payment” Respectfully following the ratio of the decision in the case of Syndicate Bank, it was decided to dismiss the appeals filed by the assessee