Article 25 of the Constitution- freedom of religion does not provide any immunity from taxation on the basis of religion: Kerala HC 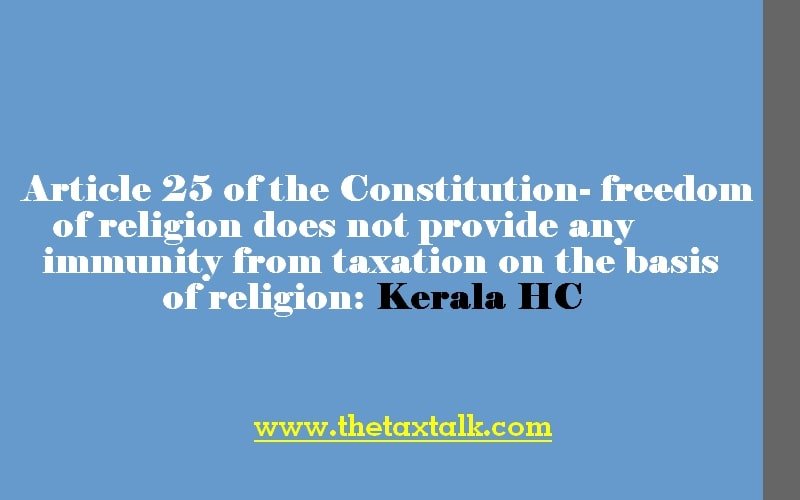 Article 25 of the Constitution- freedom of religion does not provide any immunity from taxation on the basis of religion: Kerala HC

The appellants submitted that the salaries received by the nuns and priests and made over to the religious congregations were not chargeable to income tax, and tax was never deducted at source from the salaries paid to them.

They relied upon circulars issued by the Central Board of Direct Taxes (CBDT) in 1944 as well as in 1977 to claim exemption from TDS.

In the year 2014, Income Tax Officers informed District Treasury Officers that proper deduction of TDS must be effected in the case of employees of Government or aided institutions, who are members of religious congregations receiving salary from the Government exchequer

The appellants also contended that as per the canon law, once a perpetual vow of poverty is taken, the nun or priest undergoes a civil death, and thereafter, they are not ‘persons’ under the Act. The petitioners argued that Nuns and priests are not entitled to have any income or hold any property, and all their properties, assets including salary and pension, belong or accrue to the religious congregation.

The Hon Kerala HC held as below:

The concept of civil death is alien to the Income Tax Act, and the same cannot be incorporated into the statute book through any mode of interpretation.

The canon law cannot have predominance over the Income Tax Act under any circumstances.

The legislation enacted by the legislature gains primacy and supremacy over the personal laws.

Article 25 of the Constitution- freedom of religion does not provide any immunity from taxation on the basis of religion.

Quoting the Bible verse – “Render unto Caesar the things that are Caesar’s and unto God the things that are God’s”, the Kerala High Court bench comprising Justice SV Bhatti and Justice Bechu Kurian Thomas dismissed the pleas of several priests and nuns who had opposed Tax Deduction at Source on the salaries they had been receiving while working in government and aided educational institutions.

Tags: Article 25 of the Constitution- freedom of religion does not provide any immunity from taxation on the basis of religion: Kerala HC