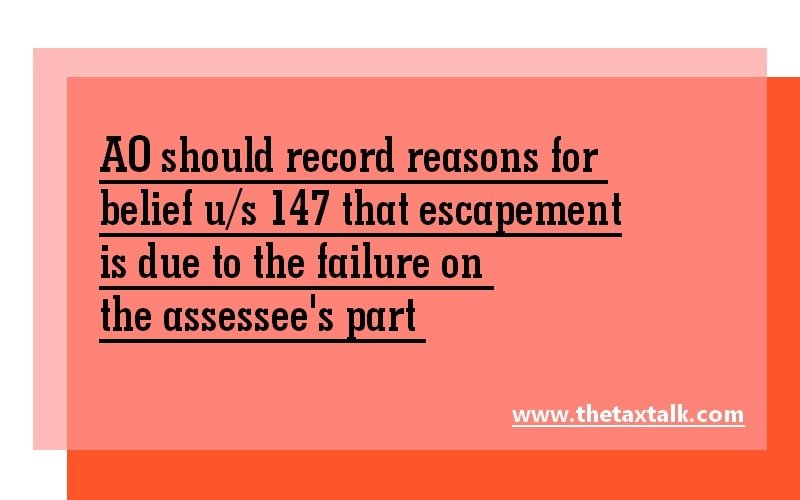 KVR Housing Architech & Engineering Vs CIT
ITA No. 205/Bang/2020
Short Over view of the case:
Assessee had filed return of income for relevant AY.
Two surveys were conducted u/s 133A. It was found that the assessee had entered into a Joint Development Agreement for construction of residential flats on lands owned by the assessee but the capital gains accruing from the sale/transfer of land was not offered to tax.
Therefore, the assessments were reopened u/s 147.
The assessee claimed that there were litigations in the civil courts by the family members of the original owners of the lands and the possession was handed over to the developer only in 2013 but AO observed that the transfer had taken place in AY 2008-09 and AY 2010-11.
Accordingly, additions were made for AY 2008-09 and 2010-11. On appeal, the CIT (A) confirmed AO’s order. Hence, the assessee filed an appeal.
On appeal, issue before Tribunal  and its observation were as under:
Whether AO should record reasons for belief u/s 147 that escapement is due to the failure on the assessee’s part?
ITAT observed as under:
having heard the parties, the Tribunal held that, post Direct Tax Laws (Amendment) Act, 1987, re-opening can be done only where the AO has reason to believe that income has escaped assessment. However, mere change of opinion cannot be per se reason to re-open. AO has no power to review; he has the power to re-assess. Additionally, AO’s reasons must have a live link with the formation of the belief;
the 1989 amendment reintroduced expression ‘reason to believe’ to replace the words ‘for reasons to be recorded by him in writing, is of the opinion’ in Section 147 to allay fears of arbitrariness since meaning of the expression ‘reason to believe’ had been explained in a number of court rulings in the past and was well settled. In order to assume jurisdiction u/s 147, two conditions are required to be satisfied – (i.) AO must have reason to believe that the income chargeable to tax has escaped assessment (ii.) Such escapement must have occurred by reason of failure on the part of the assessee.
Tags: AO should record reasons for belief u/s 147 that escapement is due to the failure on the assessee's part