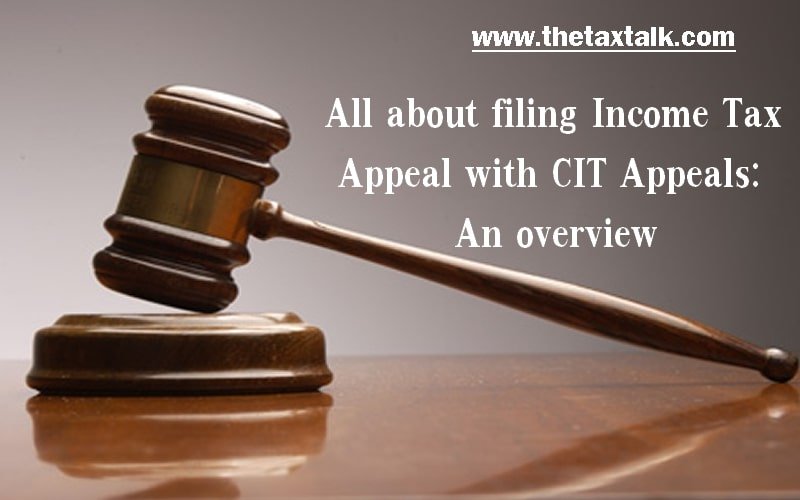 There are various knowledge sharing materials which are provided by the Income Tax Department for the update of the member. It acts as a guide to the taxpayers, tax professional & tax authorities in making the due compliances. One such knowledge sharing content is with regard to the filing income tax appeal with the Commissioner of Income Tax (appeal)

Let us know more about it:

In this part you can gain knowledge about various provisions relating to appeals to Commissioner of Income-tax (Appeals).

Time-limit for presenting an appeal

As per Section 249(2), appeal should be presented within 30 days of the following date:

(b) Where appeal is under section 248, i.e., appeal by a person denying liability to deduct tax under section 195, the date of payment of tax.

(c) In any other case, the date on which intimation of the order sought to be appealed against is served.

The Commissioner of Income-tax (Appeals) may admit belated application on sufficient cause being shown. Application for condonation of delay in filing the appeal, giving the reasons for the delay, along with necessary evidences should be filed with Form No. 35 (i.e., form of appeal). The Commissioner of Income-tax (Appeals) can condone the delay in filing the appeal if genuine reason exists for delay.

The CBDT had substituted the Rule 45 of Income-tax Rules, 1962 relating to filing of Form of appeal to CIT(A) vide Income-tax (3rd Amendment) Rules, 2016.

By virtue of such amendment, the CBDT had issued a new Form No. 35 for filing an appeal before CIT(A). Further, e-filing of Form has been made mandatory for persons for whom e-filing of return of income is mandatory.

Signature to the appeal

(2) In case of a Hindu Undivided Family, by the Karta of the family or if Karta is absent from India or is not capable for signing, by any other adult member of such family.

(4) In case of foreign company, by a person who holds a valid power of attorney from such company

(7) In case of a Local Authority, by the Principal Officer thereof

(8) In case of a Political Party, by the Chief Executive Officer of such party

(9) In case of any other Association, by the Principal Officer thereof or by any member of the Association.

(10) In case of any other Person, by that Person or by some person competent to act on his behalf.

Before filing the appeal, the taxpayer should pay the tax determined as per the return of income filed by him.

Documents to be submitted for appeal

The fees for filing the appeal before the Commissioner of Income-tax (Appeals) are as follows :

Procedure of the appeal

(*) Additional grounds means grounds which are not specified in Form no. 35

However, in following circumstances additional evidence will be accepted by the Commissioner of Income-tax (Appeals)

(a) Where the Assessing Officer has refused to admit evidence which ought to have been admitted; or

(b) Where the appellant was prevented by sufficient cause from producing the  evidence which he was called upon to be produced by the Assessing Officer; or

(c) Where the appellant was prevented by sufficient cause from producing any evidence before the Assessing Officer which is relevant to any ground of appeal; or

(d) Where the Assessing Officer has made the order appealed against without giving sufficient opportunity to the appellant to adduce evidence relevant to any ground of appeal.

Decision of the Commissioner of Income-tax (Appeals)

The Finance Act, 2020 has authorized the Central Government to notify an eappeal scheme for disposal of appeal so as to impart greater efficiency, transparency and accountability by: