Additions under section 69B couldn’t be made merely relying on confession statement obtained during search. 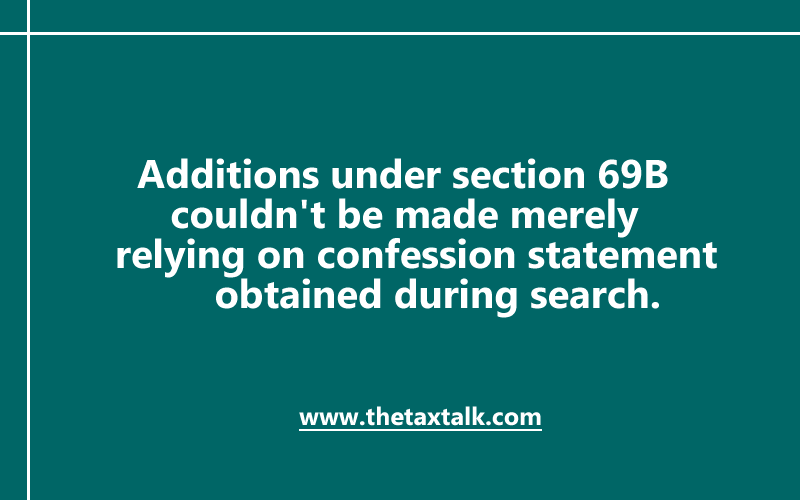 Additions under section 69B couldn’t be made merely relying on confession statement obtained during search.

PCIT v. Nageshwar Enterprises – [2020] 122 taxmann.com 41 (Gujarat)
A short over view of the case:
A search was conducted at the residential premises of the assessee by the Directorate of Revenue Intelligence (DRI).
During the course of the search, one of the partners of the firm in his statement recorded on oath admitted that there was undervaluation of imported goods and that difference of undervalued amount was paid to the seller in cash.
Therefore, Assessing Officer (AO) made additions on account of unaccounted investment and unaccounted purchases and finalized the assessment under Section 143(3).
On appeal, Gujarat HC held that in case of Kailashben Manharlal Chokshi v. CIT – [2008] 174 Taxman 466 (Guj.), it was held that merely based on an admission, the assessee cannot be subjected to additions.
Unless and until some corroborative evidence is found in support of such admission, the department would be justified in making additions.
In other words, the proposition of law as laid down is that the department cannot start with the confessional statement.
The confessional statement has to be brought in aid of other materials on record.
Further, the decision of the Supreme Court in the case of Bannalal Jat Constructions (P.) Ltd. v. Asstt. CIT [2019] 106 taxmann.com 128 (SC), indicate that the confessional statement was not the only piece of evidence.
There was no material to corroborate the statement made by the assessee in the form of confession.
Relying on the aforesaid judgements, it was held by the High Court that since in assessee’s case there was no material except the confessional statement of the assessee recorded under section 108 of the Customs Act, additions made by AO was to be deleted.
Tags: Addition without evidenceadditional without material during search