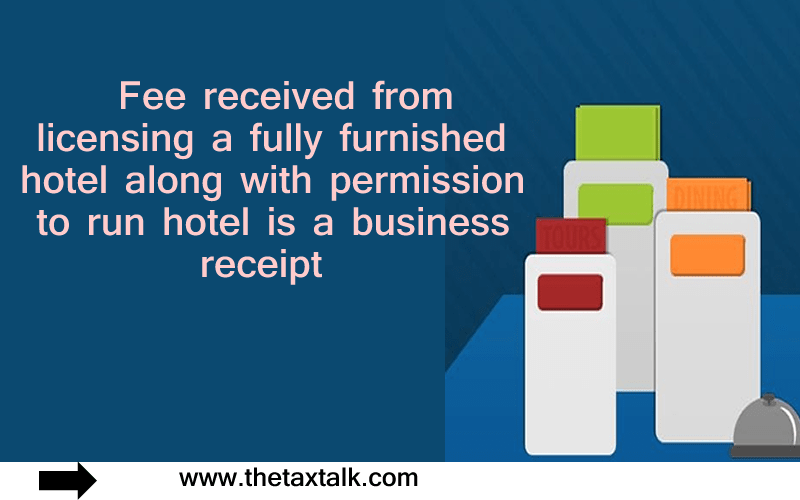 Assessee was engaged in the business of running a hotel.

It entered into a license agreement to grant the operating license of a hotel for 40 years with a right to renew the agreement for further 30 years on a revenue-sharing basis.

Revenue received from such agreement was considered under the head “Income from business or profession”.

Assessing Officer (AO) referred to the Memorandum of Association of assessee and noted that its main object was to run the hotel and not let out the property for earning rental income.

Accordingly, AO held that assessee had let out a fully furnished hotel accommodation.

Hence, income received from letting out property was nothing but rent, which was assessable under the head ‘Income from House Property’.

Assessee itself operated said hotel for a short period.

Further, due to the hotel’s business exigency and effective management, the fully furnished hotel, including the license to run the hotel, was handed over by way of a Memorandum of Understanding (MoU) on a revenue-sharing basis.

It was very clear that the parties’ understanding was not a simple agreement for letting out of premises on monthly fixed rent.

It was an arrangement for continuing the running business, which assessee earlier carried on as its main business activity.

Further, even after the hotel was licensed to another operator, the business model of assessee was not changed.

Therefore, the license fee received by assessee for licensing a fully furnished hotel along with a license to run the hotel was a business receipt, which was assessable under the head ‘income from business or profession’.

Tags: Income from Renting of hotel is a business income or house property income
Share Link: