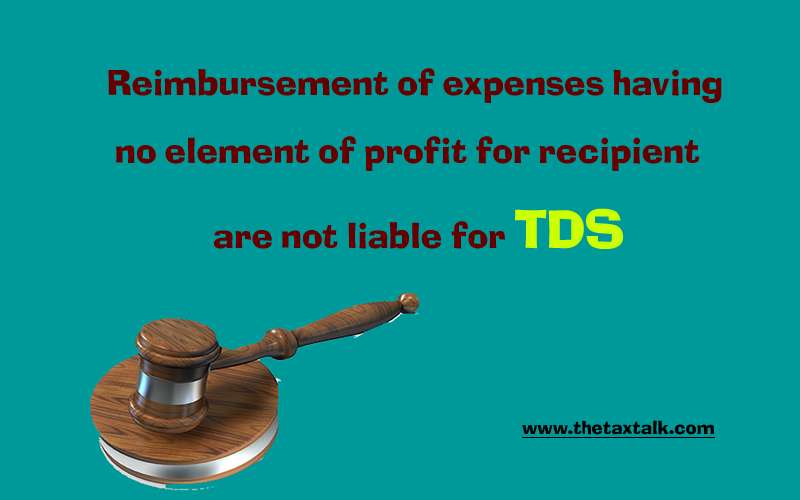 The short overview and observation by the High Court was as under :

– Payments made to C & F agents

– Assessees only contend that in clear cases where separate bills have been raised by the C & F agents towards the reimbursement of freight charges, they are not liable to deduct tax at source upon payment towards such reimbursement components, since, such payment has no income element embedded in it.

The issue before the High Court was whether Hon’ble Tribunal was right in law in upholding the disallowance under Section 40(a)(ia) of IT Act when said section cannot be applied in the instant case ?

High court has been that  unless the paid amount has any “income element” in it, there will arise no liability to pay any income tax upon such amount.

In such a situation, there will also arise no liability of any deduction of tax at source upon such amount.

Sub section (2) of Section 190 of IT Act provides that nothing in this Section shall prejudice the charge of tax on such income under the provisions of sub-section (1) of Section 4.

Section 190 of IT Act states the general rule where provisions of Chapter XVII apply.

Section 194(C) of the IT Act which is a part of Chapter XVII specifically concerns payments to be made to contractors which would include C&F agents.

Liability to deduct or collect income tax at source is upon “such income” as referred to in Section 190(1) of the IT Act.

The expression “such income” would ordinarily relate to any amount which has an “income element ” in it and not otherwise.

This is because the regime of TDS was enacted for the purpose of easy collection of income tax or to prevent the tax evasion. From bare reading of text of Section 190 and other provisions to be found in Chapter XVII, it deals with “collection and recovery of tax”.

It is clear that the TDS regime is nothing but an alternate mode of recovery or collection of income tax.

In Krupp Udhe GMBH [2010 (3) TMI 287 – BOMBAY HIGH COURT] the Division Bench of this Court speaking through Dr. D. Y. Chandrachud, as His Lordship then was, held that the question as to whether the reimbursement of expenses will form a part of the taxable income is not res integra in so far as this Court is concerned.

Reference was then made to the decision in Siemens Aktiongesellschaff [2008 (11) TMI 74 – BOMBAY HIGH COURT] wherein another Division Bench of this Court agreed with the view taken by the Calcutta High Court in CIT Vs Dunlop Rubber Co. Ltd. [1982 (2) TMI 24 – CALCUTTA HIGH COURT] and Industrial Engineering Projects (P) Ltd., [1992 (7) TMI 38 – DELHI HIGH COURT] amounts by way of reimbursement expenses do not constitute income as such and liable to any income tax.

Assessees only contend that in clear cases where separate bills have been raised by the C & F agents towards the reimbursement of freight charges, they are not liable to deduct tax at source upon payment towards such reimbursement components, since, such payment has no income element embedded in it.

According to us, the Assessees’ contention deserves to be upheld in the facts and circumstances of the present case.

There are decided cases which support the contention of the Assessees and reference can be usefully made to some such cases.

– Decided in favour of assessee.