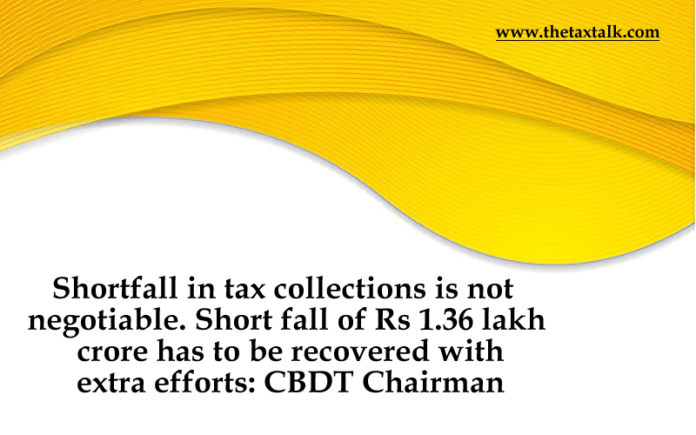 Shortfall in tax collections is not negotiable. Short fall of Rs 1.36 lakh crore has to be recovered with extra efforts: CBDT Chairman

The CBDT Chairman said that a shortfall in tax collections is not negotiable despite a cut in the corporate tax rate, and that this short fall of Rs 1.36 lakh crore has to be recovered with extra efforts.

The board of the Central Board of Direct Tax (CBDT), after not being satisfied with current pace of tax collection, laid out a strategy for improvement, and set a target for carrying out tax surveys for respective regions.

The board, along with CBDT Chairman PC Modi, carried out a video conference with the Chief Commissioners of all Income Tax branches and other high-level officers.

The CBDT Chairman said that a shortfall in tax collections is not negotiable despite a cut in the corporate tax rate. The CBDT mentioned in the meeting that this short fall of Rs 1.36 lakh crore has to be recovered with extra efforts. In Mumbai itself, a short fall of Rs 32,000 crore is expected from the target of Rs 13.36 lakh crore for FY20.

It is learnt that CBDT has laid down a strong strategies for collecting more tax in the next two months. These include identifying those companies that have discrepancies in the payment of Good and Service Tax and Income Tax, and taking 20 percent of this amount from those companies whose appeals are pending at the Commissioner level. Currently, appeals worth around Rs 3.6 lakh crore are pending at the CIT level, from which 20 percent of the money will directed to the tax collection kitty.

CBDT also proposed a crackdown on the Directors of shell of companies that are not accessible and recover tax.

Lot many TDS survey would be there across the country to meet the revenue target. Normally,  tax deducted at source (TDS) survey is carried by the tax department to check the large scale non-deduction or under-deduction of tax at source, and non-deposit of tax already deducted.

After the resolution of cases under the Insolvency and Bankruptcy Code (IBC), banks are also expected to pay significant amounts in tax.

Earlier, banks and financial institutions would write off their Non-performing assets, an exercise that gave tax benefits. Some banks have now received money due to the resolution of cases under the IBC, and are expected to pay tax where they have written off earlier.

CBDT has also identified 20,000 cases to carry out a general survey. Every region will carry out two surveys per week till March end.

CBDT mentioned that there are more than 40,000 pending cases for recovery, which amount to more than Rs 5 lakh crore. The CBDT also expected these cases to give a large amount in taxes.