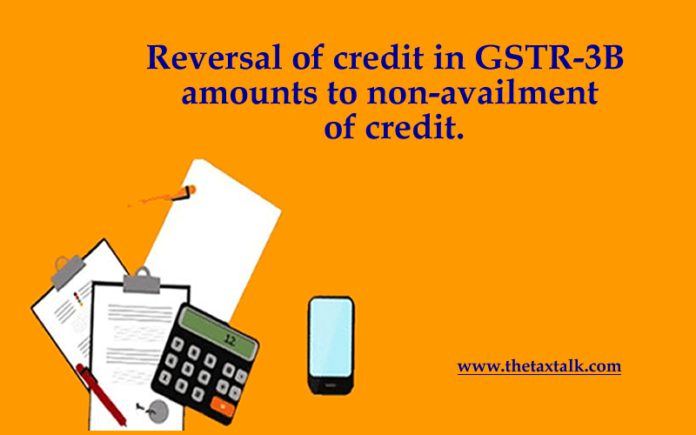 Reversal of credit in GSTR-3B amounts to non-availment of credit.

2. Briefly the facts of the present case are that the appellants are registered as service providers under the category of ‘Structural Design and Detailing consultancy Services’ and are availing CENVAT credit of service tax paid on various input services used while exporting their output services. The appellant had filed a refund claim for refund of unutilized CENVAT credit of service tax amounting to Rs.5,45,186/- availed on input services for the period April 2017 to June 2017 under Notification No.27/2012-CE (NT) dated 18.6.2012 read with Rule 8 of Cenvat Credit Rules, 2004 (CCR) and Service Tax Rules, 1994. After due process vide Order-in-Original No.162/2018 dated 31.7.2018/7.8.2018, the original adjudicating authority, AC, CT, East Division-I rejected the claim on the ground that the appellant had failed to submit proof of having debited the amount of refund being claimed in his Cenvat credit account, as per the provisions of Para 2(h) of Notification No.27/2012-CE (NT) dated 18.6.2012 read with Section 142(4) of the CGST Act, 2017. Aggrieved by the Order-in-Original, appellant filed appeal before the Commissioner (A), who rejected the appeal. Hence, the present appeal.

3. Heard both the parties and perused the records.

5. On the other hand, the learned AR defended the impugned order.

6. After considering the submissions of both the parties and perusal of the material on record, I find that the appellant have reversed the CENVAT credit in their CENVAT credit account but the same was not shown in the ST-3 Returns because by the time refund was filed, GST has been introduced and filing of ST-3  returns itself was done away with. Further, I find that the appellant has voluntarily debited the refund amount in GSTR-3B during May 2018 which clearly complies with the conditions of the Notification. Further, the Board has also clarified the said position in its Circular No.58/32/2018-GST. Further, I find that in the case of M/s. Global Analytics India Pvt. Ltd. vs. Commissioner of GST reported in 2019 ACR 388 CESTAT CHENNAI, on identical set of facts, the Tribunal has allowed the appeal of the appellant and set aside the denial of refund. Following the ratio of the above said decisions, I am of the considered view that the impugned order is not sustainable in law and therefore, I set aside the same by allowing the appeal of the appellant with consequential relief, if any.

TCS made applicable on all tour package – FAQ on Overseas...

Electronic assessment proceedings, though laudable, “can lead to erroneous assessment” if...

New Slab rates for Individuals if no exemptions/deduction

TCS made applicable on all tour package – FAQ on Overseas...

Electronic assessment proceedings, though laudable, “can lead to erroneous assessment” if...

New Slab rates for Individuals if no exemptions/deduction