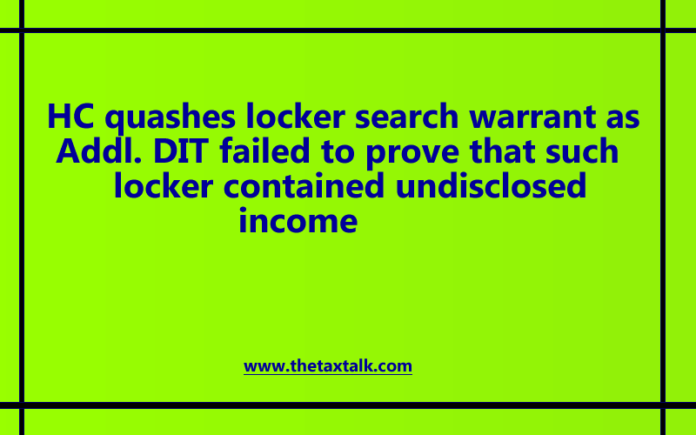 1. Search and seizure operations were conducted on premises of KSJ, who was cousin of assessee.

2. During search, keys of 3 lockers belonging to assessee were found at premises of KSJ.

3. Addl. DIT issued a warrant of search authorisation along with satisfaction note in name of assessee to search said lockers.

4. On opening 2 of those lockers, nothing was found and in one locker jewellery was found.

5. It was noted that Addl. DIT had not disclosed any material or information on basis of which he had entertained belief that lockers contained jewellery or other articles representing undisclosed income.

6. It was also taken note of that the satisfaction note did not state that any attempt was made to verify and ascertain facts in respect of assessee’s lockers post discovery of locker keys.

7. It was observed by the Court that there was no business connection, link and association established between assessee and KSJ, who was subjected to search and seizure operations.

8. In view of these facts, the HC concluded that the issuance of search warrant in respect of assessee’s lockers was unjustified and same was to be set aside.