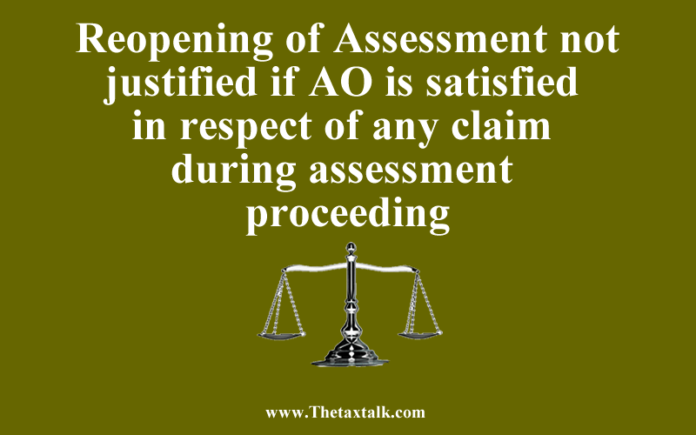 1. By consent of the learned Counsel for the parties, the petition is taken up for hearing and final disposal.

2. The petitioner has challenged a notice of reopening of assessment dated 29.03.2018. Brief facts are as under :-

2. The assessee company is engaged in the construction and development of infotech parks, cyber parks, business parks and other similar works.

3. It is observed from the details of interest paid and received in Exhit-7 of letter dt.23.11.2015 that during the year under consideration, the assessee has incurred interest expenses to the tune of Rs.47,11,82,441/- on loans taken and has earned interest income of Rs.11,08,36,618/- on loans given. It has also been mentioned by the assessee that the company has netted off interest received of Rs.11.08 crores against interest paid of Rs.47.12 crores and the remaining amount has been transferred to the WIP account. This is not correct. Interest income earned by the assessee on loan advanced is in the nature of income from other sources and the same should have been offered for taxation accordingly. In this respect, it is pertinent to mention decision of Hon. Mumbai ITAT in the case of M/s Whistling Woods International Ltd. v/s ITO (2010) 48 DTR 371, wherein it has been held that interest earned by the assessee by investing its surplus funds in deposits with banks and other companies at the time when it was constructing the building of the institute for conducting its main business activity is taxable as income from other sources.

4. Further the Hon. Supreme Court in the case of CIT V/s Autokast Ltd. (2001) 248 ITR 110 (SC) has held that interest earned from money borrowed for purchase of plant and machinery and kept in short term deposits is assessable to tax as income from other sources.

In this case, all the fund utilized or giving loans/advances was sourced from interest bearing debentures and loan taken.

5. It is also pertinent to mention here that decision of Hon. Rajasthan High Court in the case of CIT VIs Rajasthan Land Development Corporation 211 ITR 597, wherein the following principle have been set out for deciding the tax treatment for the interest earned.

(i) Interest on fixed deposits and other deposits before the commencement of the business is income from other sources.

(ii) Income from interest on deposits of surplus money during the construction period is also to be considered/treated as income from other sources.

iv) In respect of investment of surplus funds there is divergence of opinion between different High Courts and this Court in the case of Murali Investments Co. held that if the surplus funds are invested instead of keeping them idle, the income by way of interest this should be treated as income from other sources.

(v) Only in the case where surplus funds emerge out of business carried on by the assessee which is regularly carried on by the assessee and then with the intention to carry on the business of lending of money or money lending the loan is advanced, the income therefrom would be income from business. The intention has to be gathered with reference to all the activities of advancing money which should be permitted by the objects of the company and also by the resolution of the board of directors to carry on the business of money lending or lending money.

6. The Hon. Supreme Court in Tuticorin Alkali Chemicals and 3 of 13 Uday S. Jagtap 3130-18-Wp-24==.doc Fertilizers Ltd. v/s CIT 227 ITR 172 has held that where the interest debited by the assessee prior to commencement of its business, from the borrowed funds which were to be utilized for setting up the factory of the company were invested in short term deposits with bank would be chargeable to tax under the head income from other sources.

7. In view of the facts and circumstances of the case and various judicial rulings mentioned supra, interest received by the assessee amounting to Rs.11,08,36,618/- from loans should have been charged to tax under the head income from other sources and the WIP should have been increased by the whole amount of Rs.47,11,82,441/-, without allowing the netting of interest income against interest expenditure incurred during the year.

8. Therefore, I am of the opinion that for AY 2013-14 as per sub clause (c) of Explanation 2 to section 147 are applicable to the facts of the case of the assessee and the assessment year 2013-14 under consideration is deemed to be a fit case where income chargeable to tax has escaped assessment, for issue of Notice u/s. 148 of the IT Act.

9. Since this case falls under the provisions of Section 151(2) of the Income Tax Act, 1961 necessary sanction to issue notice u/s 148 is obtained from the Addl. Commissioner of Income Tax. Range 3(3), Mumbai.

6. Learned Counsel for the petitioner took us through the materials 4 of 13 Uday S. Jagtap 3130-18-Wp-24==.doc on record and the reasons recorded by the Assessing Officer and raised following contentions :-

(i) That the entire issue was examined by the Assessing Officer during the original scrutiny assessment. In the absence of any new material, the reopening of the assessment would be based on mere change of opinion.

(iii) Counsel lastly submitted that in any case the benefit of the interest expenditure would be available to the assessee upon completion of the development project and, therefore, there was no question of revenue loss.

7. In support of his contentions, Counsel relied on several judgments, reference to which would be made at the appropriate stage.

8. On the other hand, learned Counsel for the Revenue opposed the petition contending that during the original assessment, the question of correctness of the petitioner’s claim of interest expenditure was not 5 of 13 Uday S. Jagtap 3130-18-Wp-24==.doc examined. The notice of reopening has been issued within a period of 4 years from the end of the relevant assessment year. The concept of true and full disclosure, therefore, would not apply.

10. With this background, we may refer to certain material which was part of the original proceedings. Under a letter dated 28.09.2015, the Assessing Officer had called upon the petitioner to provide certain details. Relevant portion of which reads as under :-

“1. In the original return, you have shown interest income of Rs.11,08,36,618/- on which TDS of Rs.1,10,83,662/- deducted and the same has been claimed as refund due, whereas in the revised statement of computation, you have not shown the interest income nor claimed refund. Please explain.

10. Please furnish the details of project, date of starting of project and percentage of completion.”