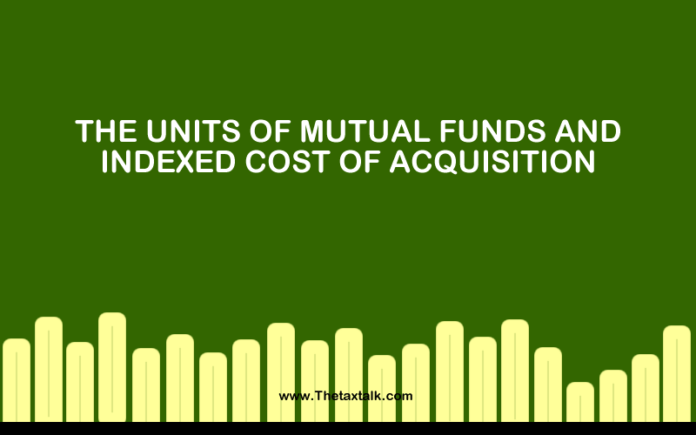 THE UNITS OF MUTUAL FUNDS AND INDEXED COST OF ACQUISITION

In some quarters, it is opined that the benefit of indexation of the cost is not available for the purpose of computing the capital gain arising on the surrender of the units, referred to in section 80CCB of the Income-tax Act, 1961.

If indexation is not operative to section 45(6) on the ground of use of the non obstante clause, then based on the same interpretation, it will not be applicable to section 45(5) (dealing with compulsory acquisition), which also commences with the words, “Notwithstanding anything contained in sub-section (1)”. It is well known that indexation is available to the assets, which are compulsorily acquired.

Period of holding and cut-off dates

In this context, it is pertinent to note that section 2(42A) has been specifically amended by the Finance Act, 1994, effective assessment year 1995-96, to secure that the units of the Unit Trust of India (UTI) and other mutual funds, will be considered as long-term capital assets, if they are held for a minimum period of twelve months. Consequently, indexation of the cost will be applicable, in computing the capital gain thereon, if the units, after holding them for not less than one year, are transferred, after 31st March, 1994. However, if the units were held for not more than 36 months and the repurchase or transfer took place before April, 1994, then the capital gain arising thereon will be treated as short-term capital gain, with the result that the indexation would not be applicable.

The concessional treatment, as regards the period of holding, is available from assessment year 1995-96, to any other security listed in a recognised stock exchange in India, or a unit of the Unit Trust of India or a unit of a mutual fund, specified in section 10(23D).

In respect of `Other securities’, listing in a recognised stock exchange is compulsory. But, in the case of the units of the Unit Trust of India and of other mutual funds, stock exchange listing may not be necessary.