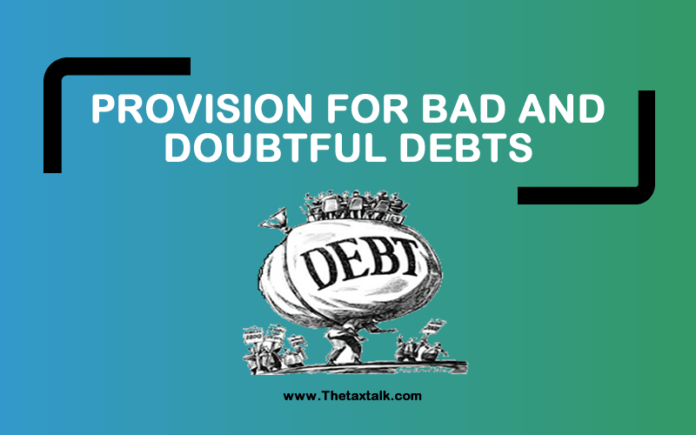 Our taxing statute shows discrimination between the banking sector and the business/industrial sector, as regards provision for bad debts. The bias in favour of the banks is clearly unjustified.

Banks are allowed deduction in respect of provision made for bad and doubtful debts for an amount not exceeding 5 per cent of their total income (computed before making any deduction in this regard vide Chapter VI-A).

In respect of the aggregate average advances made by rural branches of the banks, an additional deduction of 10 per cent (increased from 5 per cent for assessment year 1995-96 and onwards) of such advances is also allowed.

If the actual write off on account of bad debts in any year is in excess of the aggregate provisions made so far (including the current years’ provision), then the excess will be allowed as deduction, as per proviso to section 36(1)(vii).

A bank’s income for a particular year may be too low or even loss may be incurred. The criterion for allowing the deduction for the provision should be the aggregate amount of debts which are overdue, where the chances of recovery are very remote. Deduction of the provision, based on income is not logical. A statutory amendment is necessary.

The recommendation of the Reserve Bank of India, acting upon the Narasimham Committee Report, on the issue of bad debts provision is with reference to the asset classification. The committee had suggested also that the provision made by banks be allowed as deduction for tax purpose.

The assets of banks are to be classified into four categories and the bad debts provision required thereon are as follows :

(i) Standard assets (which does not disclose any problem) :

10 per cent of the aggregate amount.

(iv) Loss assets : (An advance which is fully/substantially non- recoverable and the security value on which is negligible) : 100 per cent.

It is reported (Business Line : 2nd August, 1994) that the banks’ losses included the money, which had been originally received under the Portfolio Management Scheme (PMS), lost in the security scam in the assessment years 1991-92 and 1992-93.

Banks had been offering to tax only the service charges on account of the PMS. The income on PMS accrued to those who placed the funds with the banks. The loss, incurred in this respect, cannot be set off against business income. This is one view.

In addition to the penalty imposed by the Reserve Bank of India, for violation of statutory reserve requirements on PMS, which is disallowable for tax purposes, the Income-tax Department itself is also proposing to impose penalty on the erring banks for tax evasion.