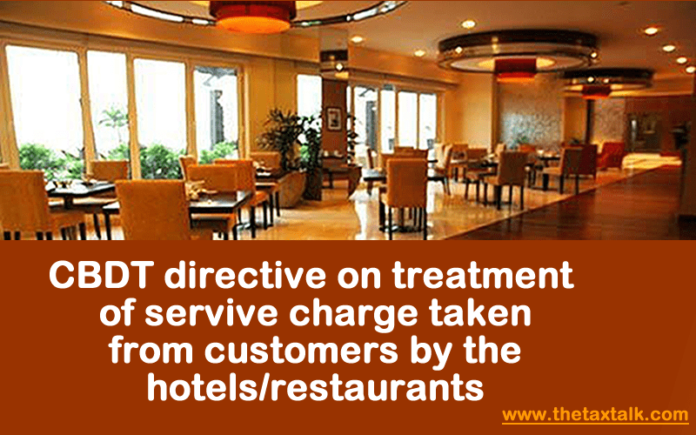 he CBDT has issued an important directive dated 19th November 2018 0n the issue of treatment of service charge taken from customers by the hotels/restaurants under the Income-tax Act, 1961.

To All Principal Chief-Commissioners of Income-tax

Subject: Treatment of service charge taken from customers by the hotels/restaurants under the Income-tax Act-reg.-

The Ministry of Consumer Affairs, Government of India vide letter dated 21.04.17 (copy enclosed) had issued a Guideline on Fair Trade Practices related to charging of service charge from consumers by hotels/restaurants.

These Guidelines were given to address the issue of unfair and restrictive trade practices adopted by some hotels/restaurants by way of charging tips/gratuities from customers without their express consent in the name of service charge.

In effect, payment of service charge by the customer to a hotel/restaurant was declared to be completely optional vide the aforesaid Guideline.

2. In the context of above mentioned Guidelines, the Ministry of Consumer Affairs has brought to the notice of the Board that some hotels/restaurants are still pre-emptively deciding upon the service charge without allowing the customers to voluntary decide whether they actually want to pay the service charge or not.

It has further been submitted by the Ministry of Consumer Affairs that there is every likelihood that such amount collected as service charge from the customers in a compulsory manner does not actually reach the workers and is instead kept by the hotel/restaurant owners.

3. Thus, while framing assessments or carrying out verification under various provisions of the Income-tax Act, 1961 in the case of hotels/restaurants, it is necessary to examine whether there is any under-reporting or non-reporting of additional income collected in the name of service charge.

Further, the disclosure and disbursement details of service charge transactions as contained in the P&L A/c, I/E statement & Balance-sheet should be critically examined to ascertain whether the receipts from service charges are fully disclosed as part of the turnover of the hotel/restaurant or not.

4. It is requested that field formations should be duly sensitized on this issue.

5. This issues with the approval of Chairman, CBDT.