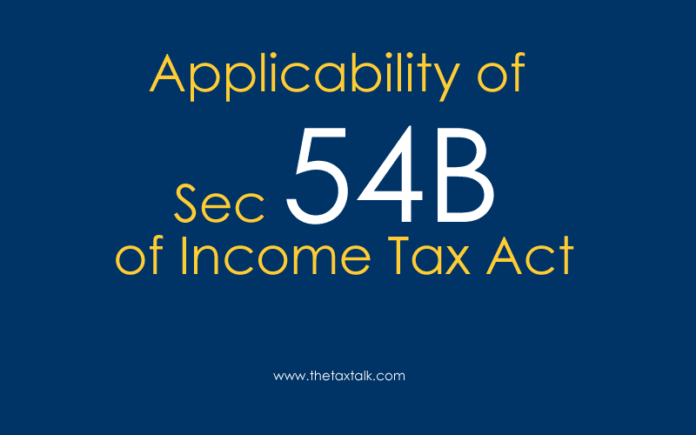 Applicability of Sec 54B of Income Tax Act

Section 54B of Income Tax Act, deals with the exemption in respect of capital gains arising on transfer of capital assets, being agriculture land (short term or long term) situated in rural area.

In case of compulsory acquisition, the period of acquisition of new agricultural land will be considered from the date of receipt of compensation.

As per Income Tax Act, the taxpayer is allowed sometime (2-3 years) to invest the capital gains in specified instruments.

If till the date of filing the return of income the capital gain arising on transfer of the old land is not utilized (in whole or in part) for purchase of another agricultural land, then the benefit of exemption can be availed by depositing the unutilized amount in Capital Gains Deposit Account Scheme in any branch of public sector bank, in accordance with Capital Gains Deposit Accounts Scheme. The new land can be purchased by withdrawing the amount from the said account within the specified time-limit of 2 years.

The exemption claimed earlier will be taxable in the following two cases:

If the amount deposited in the Capital Gains Account Scheme in respect of which the taxpayer has claimed exemption is not utilized within the specified period for purchase of another agricultural land, then the unutilized amount (for which exemption is claimed) will be taxed as income by way of long-term capital gains or short-term capital gain (depending upon the nature of original capital gain) for the previous year in which the specified period of 2 years gets over.