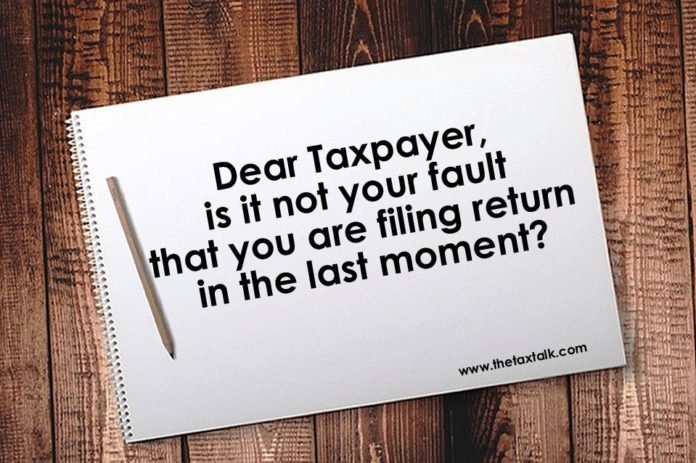 Dear Taxpayer, is it not your fault that you are filing return in the last moment?

Due to overload of Income Tax site, people are not able to file the return. Everybody is expecting that due date of filing income tax return will be extended.

Question remains- will the date be extended?

Is it logical to expect from Government that date should be extended on such occasion?

Justification by the taxpayer is very logical. “As the system is not working properly, how can the return be filed? Is it our fault”

The real question is, is it the fault of Government when all the taxpayers rush to file income tax portal on last date on last hour?

If we go to the railway station or airport and missed the train due to heavy traffic jam on the way, do we blame the Government or anyone else for missing train or flight? No, we prepare ourselves for all such contingencies. We don’t blame the Government.

The issue is not new. Every time, in the last moment of return filing it happens.

Whether citizen should not file the return well in advance. It is nowhere the Government is involved as the portal of income tax department is one of  the best system in the world which is handling heavy workload. In every part of life, such heavy flow would have a devastating effect. Is it not the taxpayer who need to prepare themselves for this?

If the taxpayers are delaying their work & wating for the last moment when the rush is supposed to be at its peak, is it not the fault of taxpayer? Why to blame Government each and everytime?

All the views are possible. We can argue for each and everything.

Easy task is to blame the Government & God for everything.

We cannot deny the fact that it is the fault of taxpayers to a great extent as they are filing the return on last moment despite the fact that the extension for one month was already provided.

Since the due date for filing of return is already extended by one month, the chances for further date extension is less.

Let us respectfully admit the fact that it is not the fault of Government. It is fault of taxpayer which we need to accept with open mind & heart.

We respect the contrary views and opinion. This is the view of one of our author.