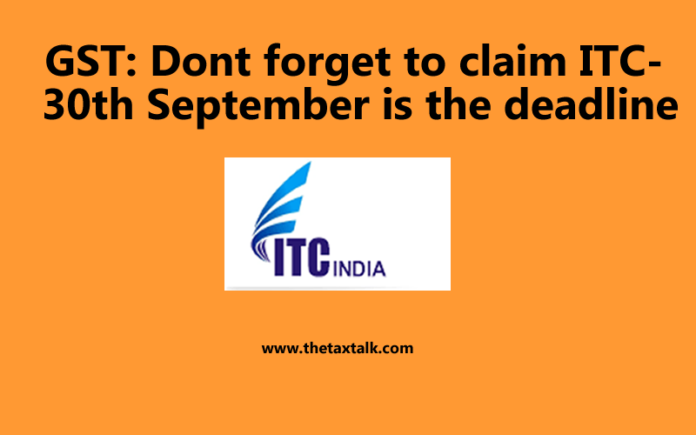 In GST Act, provisions in relation to claiming of the unclaimed ITC are given. As per Sec 16(4)of the CGST Act, “A registered person shall not be entitled to take input tax credit in respect of any invoice or debit note for supply of goods or services or both after the due date of furnishing of the return under section 39 for the month of September following the end of financial year to which such invoice or invoice relating to such debit note pertains or furnishing of the relevant annual return, whichever is earlier.”
In this section it is specified that, if any ITC of a tax invoice remains unclaimed by the taxpayer, he can claim that ITC-
1) Before the due date of filing the return for September month of the next financial year i.e 20th October 2018. Or
2) Before the filing of the relevant annual return i.e 31st December 2018, whichever is earlier.
Ex. If a taxpayer forgets to claim ITC in relation to a purchase invoice dated 23rd Dec 2017, then in such case he can claim ITC in relation to this invoice, any time before filing of the annual return or filing any return on or before the return of September month. It is to be noted that this credit can be claimed in any return but before filing September month’s return, As Annual return is not yet made available.
If the unclaimed ITC for the period July, 2017 to March, 2018 has not been claimed by the taxpayer upto filing of the return of September month, then it would lapse i.e to say cannot be claimed . After the return of September, 2018 has been filed, the taxpayer would not be able to claim this ITC in any of the return filed afterwards.
Taxpayer need to reconcile the Books of accounts and returns uploaded on the GST portal, for the financial year 2017-18. Also, taxpayer should download and match GSTR 2A for a relevant period with their books to find out  unclaimed credit if any. Discrepancies if any, may be adjusted in the return filed before September 2018 or in the September 2018 return.
prima facie the provision of Section 16(4) seems to be wrong. Because the annual return is not yet made available. If there is any addition or reduction of ITC over the period, then the best possible suggestion to correct the same is doing so upto filing of the annual return.
As it would become difficult to adjust the unclaimed ITC in the return of the September month. The government must grant time period for this adjustment, at least upto filing of the annual return i.e GST audit report, taking into consideration that GST was a new introduction in the middle of the financial year.
Home  Submit Article   Discussion