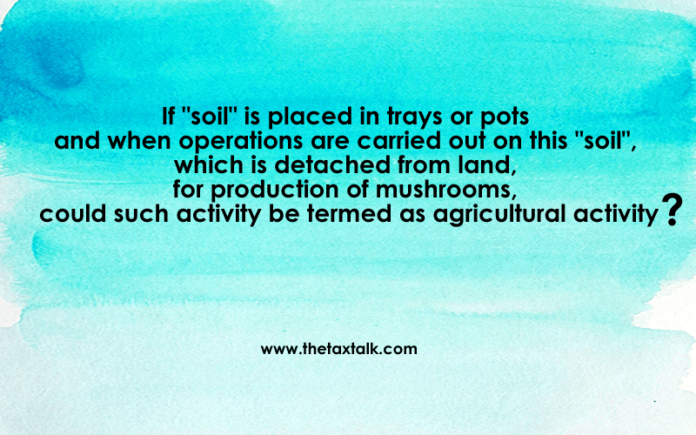 A survey operation was conducted at the mushroom growing unit, at Kallakal, Telangana.

The gist of the submissions of the assessee was as under:

♦ Operations are conducted on land which is agricultural land and the operations are agriculture in nature.
♦ Mushroom growth is a natural agricultural activity and assessee is only a facilitator. Therefore, the decision of the Apex Court in the case of CIT v. Venkateswara Hatcheries (P.) Ltd. [1999] 103 Taxman 503/237 ITR 174 applies. There it was held that a natural product can be produced only through natural process and the facilities provided by human effort is not relevant and the production would always remain as natural product. Also, merely because the conventional method of production is given a go by and artificial production is introduced, it would not change the character of production which is natural.
Findings of the AO

3. The AO’s arguments were as under:

♦ Mushrooms are grown by the assessee in ‘growing rooms’ under ‘controlled conditions’ in racks placed on shelves above land. Compost is prepared with paddy straw, gypsum, manure and urea, which is not land. In CIT v.. Kokine Dairy [1938] 6 ITR 502 (Rangoon), it was held the term ‘agriculture’ does not cover activities which are remotely connected with land and where assessee had not performed basic operations on land, the income derived was not agricultural income. Such instances are income from thopes, income from sale of cocoons, income from sale of eucalyptus oil, etc;
♦ Section 80JJA of the Act inserted by the Finance Act, 1979 w.e.f.. 01-04-1980 provided a deduction in respect of profit and gains from business of growing mushrooms and Circular No. 258, dt. 14-06-1979 and the explanatory Memorandum to the Finance Act, 1979, and Circular No. 372/1983 conclude that intent of the Legislature is that growing of mushrooms is not in the nature of agriculture income but is reckoned to be income from business.
The AO made an addition of Rs. 12,13,05,130 holding that income from growing of mushrooms is not agricultural income and the assessee should be assessed under the head “Business or Profession.”

Aggrieved, assessee carried the matter in appeal before the CIT (A) challenging, the findings of the Assessing Officer.

Findings of the CIT (A)

4. After considering the rival submissions, the First Appellate Authority, relying on the definition of ‘Land’ and ‘Soil’ in Black’s Law Dictionary and Random House dictionary, held that the word ‘land’ includes any soil, and, hence, the prepared soil is land. That soil is the basis for production of mushrooms as initial mushroom spawn is prepared and the spawn is then cultured in a similar type of prepared soil, to be used as seed for cultivation of mushroom. Thereafter, the same is removed from the soil and is spread over the soil arranged in giant size trays, the depth of which is up to 8 inches. These trays containing soil and trays are kept vertically on the land and the watering of the soil is done through coir pith to maintain the required moisture.

The.CIT (A) observed that just because the assessee-company is using the land vertically by using large trays, for producing mushroom, by adopting a natural agricultural process and by cultivating the soil, it cannot be said that land is not used for production of mushrooms.

The CIT(A) concluded that production of mushrooms is a process of agricultural production and agricultural income derived is eligible for exemption u/s. 10(1) of the Act.

2. The Tribunal said three questions arose out of issues, after perusing facts and circumstances:

(i) If “soil” is placed in trays or pots and when operations are carried out on this “soil”, which is detached from land, for production of mushrooms, could such activity be termed as agricultural activity?
(ii) Is mushroom a “fungi” or “vegetable or plant”? Is it agricultural income, if the product is a ‘fungi’?
(iii) When agricultural production is done in “controlled conditions”, does it cease to be agricultural operation ?
2.1 First issue: The Tribunal reproduced the relevant portions of the landmark judgment of the SupremeCourt in case of CIT v. Raja Benoy Kumar Sahas Roy [1957] 32 ITR 466 on agricultural issue.

The term “Agriculture” in judgement receives a wider interpretation both with regard to its “operations” as well as the “results” of such operation.

“…mango, coconut, palmyra, orange, jack, arecanut, tamarind … trees are planted usually in an enclosed land …. yielding fruit only after their maturity. There is no reason why the planting rearing, watering, fencing and protection of such trees … should not be held to be agriculture”. .. In the case of coffee grown on hiss slopes, there is no ploughing or tillage …, but it cannot be maintained that growing coffee is not an agricultural operation.”

2.1.2 Comments: The only part of the land that is cultivable, and which is useful for agricultural activity is ‘Soil’ which is the top layer of land. Whether such soil is attached to land or is placed in containers above the land should, in court’s humble view, not make a difference.

Hence, in Tribunal’s opinion the soil which is placed on the vertical space above the land in trays, in one sense of the term, is also land.

Next, Explanation-3 to Section 2(1A) relied upon by assessee says that income from saplings or seedlings in a nursery shall be deemed to be agricultural income.

The Union Budget for 2008-09 exempted from tax income arising from saplings or seedlings grown in a nursery.

“…the plants sold by the assessee in pots were the result of primary as well as subsequent operations comprehended within the term ‘agriculture’ and they are clearly the products of agriculture.”

“The company had developed a greenhouse… The objection of the Revenue was that the rose plants were not grown on the land, therefore the generation of income was not directly connected with the operation of land. Somehow we are not agreeing with the said proposition of the Revenue-department.

The assessee’s case was that the technology deployed was (i) use of soil and operation on soil, (ii) use of particular soil type contents, i.e., coco peat, manure, etc., present in the soil, (iii) drainage system as over watering harms the roots as well as quality, (iv) bending shoots for maximizing the quality of roses, and (v) pest and diseases control for providing protection to roses.

The fundamental requirement is that it should remain connected with the basic agriculture operation.”

The court said, “We should not take a ‘pedantic’ view on this issue. The view of the legislature is more expansive and purposive than the view of the courts.”

“Soil”, even when separated from land andplaced in trays, pots, containers, terraces, compound walls, etc., continues to be a specie of land.

2.2 Second issue: The assessee submitted that Mycelium is a vegetative part of the fungi. But Revenue submited that vegetative part does not mean that the classification is vegetable and it only refers to the reproductive feature of the “fungi”. ”

The mushroom does not arise from any secondary agricultural operation. Unlike Kokine Dairy (supra), relied on by the AO it cannot be said that production ofmushroom is only remotely connected with land. Comparison made with sale of silk cocoons by relying on K. Lakshmansa & Co. v. CIT [1981] 5 Taxman 272/128 ITR 283 (Kar.), is wrong, as silkworms feed on mulberry leaves and are not products which are raised from land. Mulberry leaves which are products arising from land, are, in fact, fodder to silk worms.

2.3 Third issue: There can be no agriculture without controlling the conditions of production by human intervention.

In Asst. CIT v. KF Bio Plants (P.) Ltd. [IT Appeal No. 1110 (PN) of 2011, dated 25-9-2012], the Tribunal held that nature of agricultural income would not change merely because agricultural operation was carried out in a greenhouse under a controlled environment.

“Considering the advancement of technology and the use of the advanced equipment in cultivation coupled with the conventional cultivation method put together, it has to be held that the operation carried out by the assessee was agricultural operation in nature.”

The Hyderabad Tribunal also concurred with this view.

The Revenue placed reliance on Section80JJA of the Act. The assessee relied on the Explanation 3 inserted in Section 2(1A) of the Act. Much water has flown since the introduction and repeal of Section 80JJA. With the passage of time the views change. The Hyderabad Tribunal held that decision on this issue cannot be guided by Section 80JJA of the Act.

On a careful consideration of the material on record, the Tribunal concluded that the mushroom, is not a’vegetable,’ ‘plant’ or an ‘animal’.

In view of the above discussions, the Tribunal answered the question in the affirmative, i.e., in favour of the assessee.