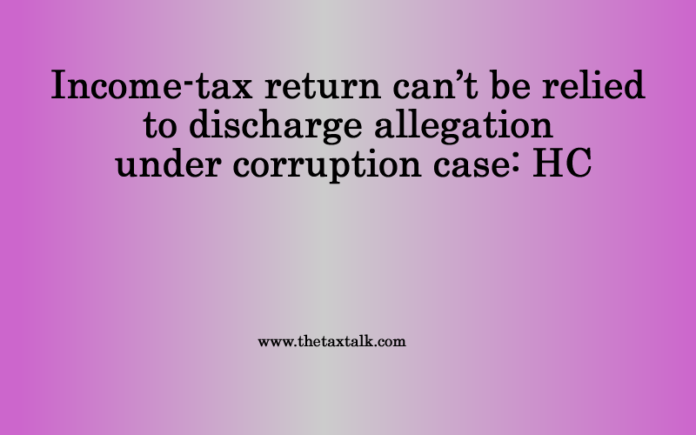 Madras HC dismisses Petitioner’s (a public servant) criminal revision petition under Prevention of Corruption Act, 1988, rejects reliance on income-tax returns / paid income-tax; The Petitioner/Accused was found in possession of pecuniary sources and properties in his name which are disproportionate to his known source of income and further in the name of his relatives who did not have any independent source of income, accordingly he was held guilty of the criminal offence u/s. 13(2) r.w. 13(1)(e) of Prevention of Corruption Act, 1988;  With respect to petitioner’s stand that his relatives were regular income-tax assessees, HC relies on SC ruling in State of Tamil Nadu by Inspector of Police, Vigilance and Anti-corruption Vs. N.Suresh Rajan and Others wherein it was held that paid Income-tax cannot be relied upon to discharge the accused person particularly in view of allegation made by the prosecution that there was no separate income to amass such huge properties;  SC had further remarked that it will give opportunity to be corrupt public servants to amass property in the name of known persons, pay income tax on their behalf and then be out from the mischief of law; HC notes that the Income Tax Authorities are not vested with the power to make investigation as defined under Section 2(h) of Cr.P.C., observes that “The prime job of the income tax authority is to detect the income to levy the income tax and to prevent evasion of tax by the tax evaders.” :HC
The ruling was delivered by Justice A.M.Basheer Ahamed
Mr.Veera Kathiravan argued on behalf of the Petitioner while the Respondent-State was represented by Advocate P.Kandasamy
Note:
SC in Selvi J. Jayalalitha & ORS. [TS-53-SC-2017] had held that IT returns/orders would not by themselves establish that income referred therein had been from lawful source as contemplated in Sec 13(1(e) of the Prevention of Corruption Act.