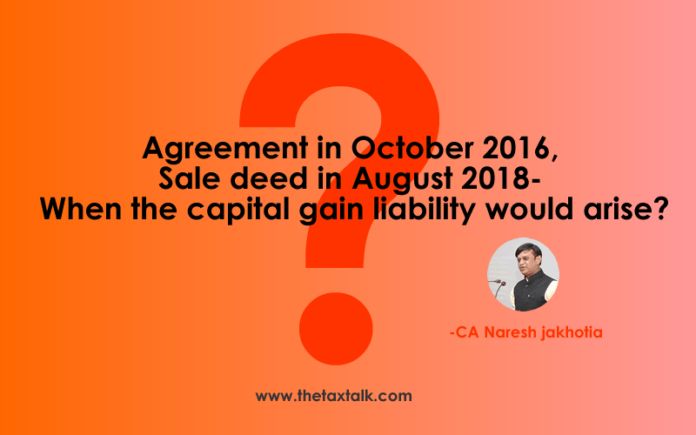 I went through article on your blog and I was thoroughly impressed with the depth of your knowledge on the subject of long term capital gains and its implication.

Sir, we in the year 2016 April had sold an agricultural land which my father had inherited. The condition the buyer (Mr. A) put forth was that registered document would only happen once the NA happens and the cost for it would be borne completely by the buyer. Sir, we bought a residential flat against the proceeds. The details of the transaction are as follows:

The payment of the land was completely received by us in October 2016 with deduction of TDS and agreement for sale was notarized stating that the possession is transferred to Mr. A and we have no claim on the land except guaranteeing that the title of the land is free from all claims. The agreement also stated that all expense from now on pertaining to the land and also the NA expense will be borne by Mr. A.

The residential flat we purchased was in April at the same time we sold the land and the payments as and when received by us from Mr. A were paid to the builder from whom we purchased the flat

As entire payment was completed by Mr. A for the land in October 2016, we paid the entire amount for the residential flat and registered the document of the flat on 5th November 2016.

The registration of my land happened in June 2018 as the NA procedure took lot of time then what we expected. Now my CA has to say that we may have to pay LTCG on the entire proceeds since registration of the house is only allowed within one year from the date of transfer of the flat.

But he also said that MOU with Mr. A on 26th November 2016 for the land which is notarized also holds water and can termed a “transfer” document and hence we will be exempted from payment of any tax. There are rulings which state that transfer of possession to be considered as the date of transfer.

Also my accountant is of the opinion that we should revise the return of 2016-17 and show LTCG computation as he had forgotten that time as the entire amount from sale was received and there was no pendency it was a sale and can’t be termed as advance.

It is a very pressing issue for me as the transaction size is quite big.