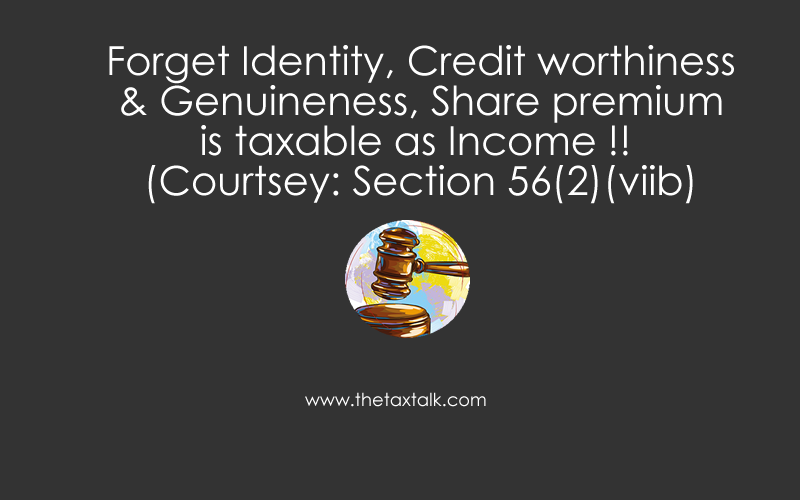 Forget Identity, Credit worthiness & Genuineness, Share premium is taxable as Income !!
(Courtsey: Section 56(2)(viib))
Sunrise Academy of Medical Specialities (India) (P.) Ltd vs. ITO (Kerala High Court) (DB)
S. 56(2)(viib) vs. s. 68: Any premium received by a Company, in which the public does not have substantial interest, on sale of shares, in excess of its face value, can be treated as income from other sources u/s 56(2)(viib). This is not controlled by s. 68 which provides that if the assessee does not provide a satisfactory explanation for the credit, the amount can be assessed as income. If S. 68 is applicable, and the proviso is not satisfied, then the entire amounts credited to the books would be treated as income. If satisfactory explanation is offered as to the source, then the premium paid as revealed from the books will be brought to tax as income from other sources
Any premium received by a Company on sale of shares, in excess of its face value; if the Company is not one in which the public has substantial interest, would be treated as income from other sources, as seen from Section 56(2) (viib) of the Act, which we do not think can be controlled by the provisions of Section 68 of the Act. Section 68 on the other hand, as substituted with the provisos, treats any credit in the books of accounts, even by way of allotment of shares; for which no satisfactory explanation is offered, to be liable to income-tax. Clause (viib) of Section 56(2) is triggered at the stage of computation of income itself when the share application money received, from a resident, by a Company, in which the public are not substantially interested; is above the face value. Then the aggregate consideration received for the shares as exceeds the fair market value will be included as income from other sources. However, when the resident investor is not able to explain the nature and source for the credit seen in the books of accounts of the Company or the explanation offered is not satisfactory then the entire credit would be charged to income tax for that previous year