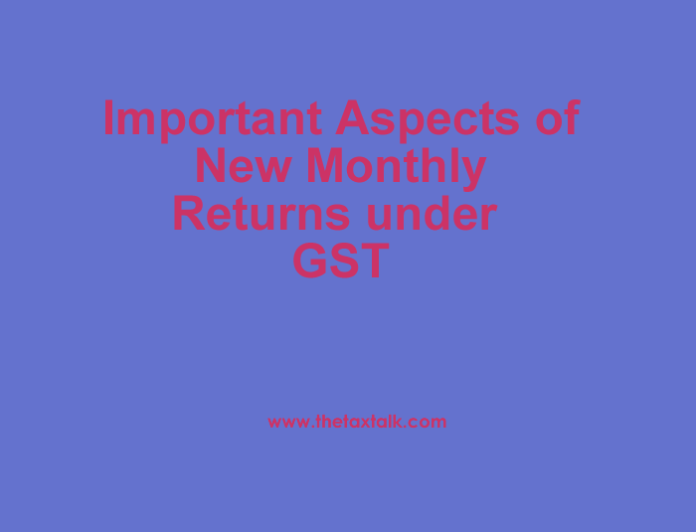 Following are Important Aspects of New Monthly Returns under GST as released by the GST Council in their latest meeting:

It’s a compulsory return for the large taxpayer (i.e.  Turnover more than 5cr), this facility would be optional for the small taxpayer.The due date for filing of this return shall be 20th of the next month.

There would be a facility for continuous uploading of invoices by the supplier and same can be viewed by the recipient, hereafter called “viewing facility”.

Invoices uploaded by the supplier by 10th of succeeding month shall be auto-populated in the main return of the supplier.

These invoices shall be available for availing the ITC in the return filed by recipient.

The recipient would be able to avail the ITC credit on self- declaration basis even on the invoices not uploaded by the supplier by using the facility called missing invoice.

Where credit is availed on missing invoices by the recipient and subsequently not uploaded by supplier  within next two month , ITC availed on those invoices shall be recovered from the recipient.

Recovery of ITC in above mention cases shall be made only after serving a proper notice and issue of order.

Missing invoice can be reported by the supplier in the main return for any tax period with interest  and penalty.

Locking of invoices (Accept, reject, pending) option  shall be available with the recipient if there is no action taken by a recipient in such situation it shall be perfumed as deemed accepted.

Invoices on which credit has been availed by the recipient will  not  be allowed to be  amended  by a supplier, a credit or debit note will have to be issued by a supplier in order to amend these. For other cases, invoices can be amended.

There would be a facility to file only two amendment returns  for each tax period specified in section 39(9) of CGST Act, 2017.

A wrongly locked invoice  shall be unlocked online by the recipient himself subject to reversal of the input tax credit by him and online confirmation thereof.

Few more important notes to the above features: