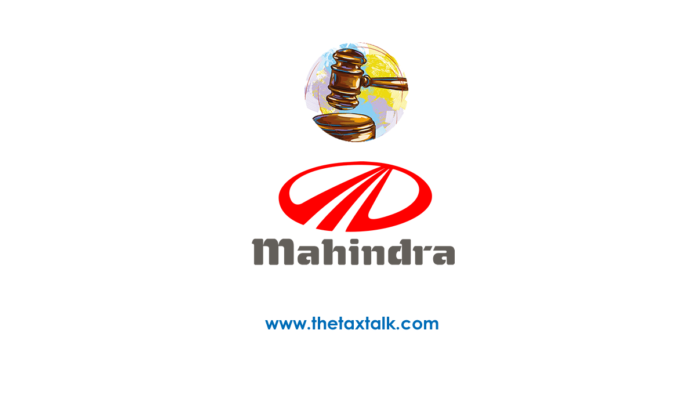 (a) For the proper appreciation of the issue in the case at hand, we deem it apposite to mention the gist of the facts. The appellant herein is the Department of Income Tax (for brevity ‘the Revenue), on the other hand, respondent herein is Mahindra & Mahindra Ltd. (for brevity ‘the Respondent’) – a company registered under the Companies Act, 1956.

(b) The Respondent, way back, decided to expand its jeep product line by including FC-150 and FC-170 models. For this purpose, on 18.06.1964, it entered into an agreement with Kaiser Jeep Corporation (for short ‘the KJC’) based in America wherein KJC agreed to sell the dies, welding equipments and die models to the assessee. The final price of the tooling and other equipments was agreed at $6,50,000/- including cost, insurance and freight (CIF). Meanwhile, the Respondent took all the requisite approvals from the concerned Government Departments. The said toolings and other equipments were supplied by the Kaiser Jeep Corporation through its subsidiary Kaiser Jeep International Corporation (KJIC).

(c) However, for the procurement of the said toolings and other equipments, the KJC agreed to provide loan to the Respondent at the rate of 6% interest repayable after 10 years in installments. For this purpose, the Respondent addressed a letter dated 07.06.1965 to the Reserve Bank of India (RBI) for the approval of the said loan agreement. The RBI and the concerned Ministry approved the said loan agreement.

(f) Being dissatisfied, the Respondent preferred an appeal before the Commissioner of Income Tax (Appeals) being No. CIT(A) V/CCIV/IT/261/79-80. After perusal of the matter, learned CIT (Appeals), vide order dated 23.03.1981, dismissed the appeal and upheld the order of the ITO with certain modifications.

(g) Being aggrieved, the Respondent as well as the Revenue preferred appeals being Nos. 2007 (Bomb.) of 1981 and 2132 of 1981 respectively before the Tribunal. The Tribunal, vide order dated 16.08.1982, set aside the order passed by learned CIT (Appeals) and decided the case in favour of the Respondent.

(h) Being aggrieved, the Revenue filed a Reference before the High Court at Bombay. In that Reference, three applications were filed, one by the assessee and rest two by the Revenue. Vide impugned common judgment and order dated 29.01.2003, the High Court confirmed certain findings of the Tribunal in favour of the Respondent.

(i) Hence, these instant appeals have been filed by the Revenue.

4) Heard learned senior counsel for parties and perused the factual matrix of the case.

5) The short point for consideration before this Court is whether in the present facts and circumstances of the case the sum of Rs. 57,74,064/- due by the Respondent to Kaiser Jeep Corporation which later on waived off by the lender constitute taxable income of the Respondent or not?

7) Before concluding, it was contended that since an amount is waived off, for which the Respondent is claiming exemption, it actually amounts to income at the hands of the Respondent in the sense that an amount which ought to be paid by it is now not required to be paid. As a result, the case of the Revenue falls within the ambit of Section 28(iv) and, alternatively within Section 41 of the IT Act. Hence, the decision of the High Court is liable to be set aside.

8) Conversely, learned senior counsel for the Respondent submitted that the Kaiser Jeep International Corporation (KJIC) supplied the toolings and the loan was given by the Kaiser Jeep Corporation (KJC), hence, these transactions were independent transactions. The only relationship, which survived after the supply of toolings, was that of a lender and borrower. The purchase of toolings was not a transaction for the purchase of goods on credit in the ordinary course of business nor could it be equated to unpaid purchase consideration to be liquidated over a period of time.

9) Further, it was also submitted that it is very clear that the amount of $650,000 provided by KJC was in fact a loan on which interest was being paid regularly from time to time. It is also pointed out that in the books of account of the Respondent, this loan has been shown in the Balance Sheet under the heading “Loans-unsecured”. Hence, it is submitted that the said sum could not be brought to tax as it represents the waiver of a loan liability which was on the capital amount and is not in the nature of income. Accordingly, the High Court rightly upheld the order of the Tribunal and, hence, these appeals deserve to be dismissed.

10) The term “loan” generally refers to borrowing something, especially a sum of cash that is to be paid back along with the interest decided mutually by the parties. In other terms, the debtor is under a liability to pay back the principal amount along with the agreed rate of interest within a stipulated time.

11) It is a well-settled principle that creditor or his successor may exercise their “Right of Waiver” unilaterally to absolve the debtor from his liability to repay. After such exercise, the debtor is deemed to be absolved from the liability of repayment of loan subject to the conditions of waiver. The waiver may be a partly waiver i.e., waiver of part of the principal or interest repayable, or a complete waiver of both the loan as well as interest amounts. Hence, waiver of loan by the creditor results in the debtor having extra cash in his hand. It is receipt in the hands of the debtor/assessee. The short but cogent issue in the instant case arises whether waiver of loan by the creditor is taxable as a perquisite under Section 28 (iv) of the IT Act or taxable as a remission of liability under Section 41 (1) of the IT Act.

12) The first issue is the applicability of Section 28 (iv) of the IT Act in the present case. Before moving further, we deem it apposite to reproduce the relevant provision herein below:-

(iv) the value of any benefit or perquisite, whether convertible into money or not, arising from business or the exercise of a profession; x x x”

14) Another important issue which arises is the applicability of the Section 41 (1) of the IT Act. The said provision is re-produced as under:

“41. Profits chargeable to tax.- (1) Where an allowance or deduction has been made in the assessment for any year in respect of loss, expenditure or trading liability incurred by the assessee (hereinafter referred to as the first-mentioned person) and subsequently during any previous year,-

(a) the first-mentioned person has obtained, whether in cash or in any other manner whatsoever, any amount in respect of such loss or expenditure or some benefit in respect of such trading liability by way of remission or cessation thereof, the amount obtained by such person or the value of benefit accruing to him shall be deemed to be profits and gains of business or profession and accordingly chargeable to income-tax as the income of that previous year, whether the business or profession in respect of which the allowance or deduction has been made is in existence in that year or not; or

15) On a perusal of the said provision, it is evident that it is a sine qua non that there should be an allowance or deduction claimed by the assessee in any assessment for any year in respect of loss, expenditure or trading liability incurred by the assessee. Then, subsequently, during any previous year, if the creditor remits or waives any such liability, then the assessee is liable to pay tax under Section 41 of the IT Act. The objective behind this Section is simple. It is made to ensure that the assessee does not get away with a double benefit once by way of deduction and another by not being taxed on the benefit received by him in the later year with reference to deduction allowed earlier in case of remission of such liability.

It is undisputed fact that the Respondent had been paying interest at 6 % per annum to the KJC as per the contract but the assessee never claimed deduction for payment of interest under Section 36 (1) (iii) of the IT Act. In the case at hand, learned CIT (A) relied upon Section 41 (1) of the IT Act and held that the Respondent had received amortization benefit. Amortization is an accounting term that refers to the process of allocating the cost of an asset over a period of time, hence, it is nothing else than depreciation. Depreciation is a reduction in the value of an asset over time, in particular, to wear and tear. Therefore, the deduction claimed by the Respondent in previous assessment years was due to the deprecation of the machine and not on the interest paid by it.

16) Moreover, the purchase effected from the Kaiser Jeep Corporation is in respect of plant, machinery and tooling equipments which are capital assets of the Respondent. It is important to note that the said purchase amount had not been debited to the trading account or to the profit or loss account in any of the assessment years. Here, we deem it proper to mention that there is difference between ‘trading liability’ and ‘other liability’. Section 41 (1) of the IT Act particularly deals with the remission of trading liability. Whereas in the instant case, waiver of loan amounts to cessation of liability other than trading liability. Hence, we find no force in the argument of the Revenue that the case of the Respondent would fall under Section 41 (1) of the IT Act.

17) To sum up, we are not inclined to interfere with the judgment and order passed by the High court in view of the following reasons:

(b) Section 41(1) of the IT Act does not apply since waiver of loan does not amount to cessation of trading liability. It is a matter of record that the Respondent has not claimed any deduction under Section 36 (1) (iii) of the IT Act qua the payment of interest in any previous year.