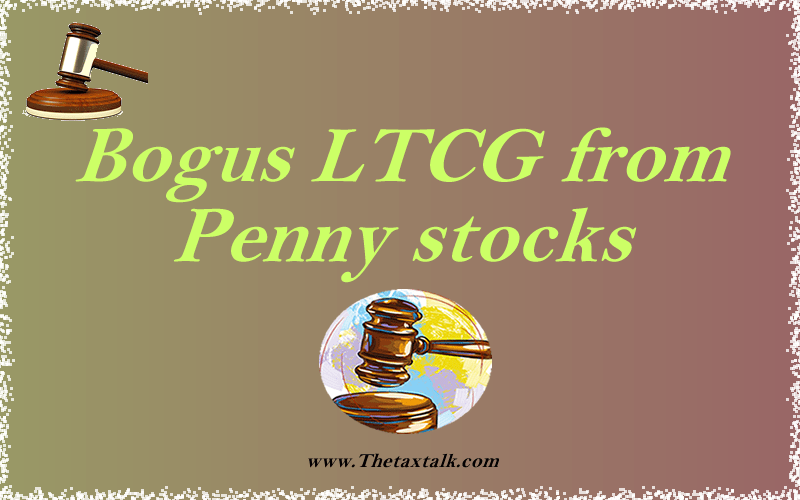 Bogus LTCG from Penny stocks: The assessee has not tendered cogent evidence to explain how the shares in an unknown company worth Rs.5 had jumped to Rs.485 in no time. The fantastic sale price was not at all possible as there was no economic or financial basis to justify the price rise. the assessee had indulged in a dubious share transaction meant to account for the undisclosed income in the garb of long term capital gain. The gain has accordingly to be assessed as undisclosed credit u/s 68

(iii) On hearing the learned counsel for the assessee and on a perusal of the orders of the income tax authorities, it appears that there is no scope for interference with the said orders in this appeal. By referring to the aforesaid facts, which are narrated in the earlier part of this order, the authorities found that the assessee had made investment in two unknown companies of which the details were not known to her. It was held that the transaction of sale and purchase of shares of two penny stock companies, the merger of the two companies with another company, viz. Khoobsurat Limited did not qualify an investment and rather it was an adventure in the nature of trade. It was held by all the authorities that the motive of the investment made by the assessee was not to derive income but to earn profit. Both the brokers, i.e. the broker through whom the assessee purchased the shares and the broker through whom the shares were sold, were located at Kolkata and the assessee did not have an inkling as to what was going on in the whole transaction except paying a sum of Rs.65,000/in cash for the purchase of shares of the two penny stock companies. The authorities found that though the shares were purchased by the assessee at Rs.5.50 Ps. Per share and Rs.4/per share from the two companies in the year 2003, the assessee was able to sell the shares just within a years time at Rs.486.55 Ps and Rs.485.65 Ps per share. The broker through whom the shares were sold by the assessee did not respond to the assessing officer’s letter seeking the names, addresses and the bank accounts of the persons that had purchased the shares sold by the assessee.

(iv) The authorities have recorded a clear finding of fact that the assessee had indulged in a dubious share transaction meant to account for the undisclosed income in the garb of long term capital gain. While so observing, the authorities held that the assessee had not tendered cogent evidence to explain as to how the shares in an unknown company worth Rs.5/had jumped to Rs.485/in no time. The Income Tax Appellate Tribunal held that the fantastic sale price was not at all possible as there was no economic or financial basis as to how a share worth Rs.5/of a little known company would jump from Rs.5/to Rs.485/. The findings recorded by the authorities are pure findings of facts based on a proper appreciation of the material on record. While recording the said findings, the authorities have followed the tests laid down by the Hon’ble Supreme Court and this Court in several decisions. The findings do not give rise to any substantial question of law. The judgments reported in (2012) 20 Taxman.com 529 (Bombay) (CIT Versus Jamnadevi Agrawal), (1957) 31 ITR 294 (Bombay) (Puranmal Radhakishan Versus CIT), (1970) 77 ITR 253 (SC) (Raja Bahadur Versus CIT) and (2015) 235 Taxman 1 (Bom) (CIT Versus Smt.Datta M. Shah) and relied on by the learned counsel for the assessee are distinguishable on facts and cannot be applied to the case in hand.