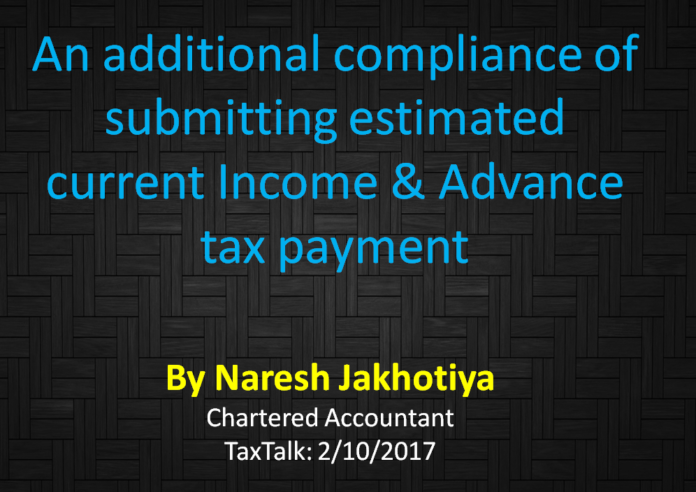 We have read in the newspaper about filing of estimate of income tax return before 30th September? Ours is a private limited company and so whether it is compulsory to file any such estimate? Is it applicable from FY 2017-18 or 2018-19? If yes, why is so much additional compliance burden if the advance tax payment law is already there and taxpayers are complying with it? We are already over burdened with GST, will this not add to unwanted compliances? Ultimately, even if there is a delay in payment of tax, it is paid with interest at the end of the day. Why such ridiculous provisions? Any logic for this additional formality? [mukesh.motwani63@gmail.com]

“Taxation without Representation is never a good law”.

Government has suitably amended and added clause 54EE in Income Tax Act to save additional Rs. 50 lakhs in capital gain in specified securities of Govt. undertakings. So far, Government has not issued any notification. The investment has to be made within 6 months of property sale. It appears that those who have sold property are awaiting it and will not be able to avail this provision. Kindly intimate if any info is there & elaborate more about section 54EE. [Ramnarayan Dubey-ra.du.1944@gmail.com]

3.      Encouraging start up is an excellent initiative of the Government and carries the potential to take the country to the next higher level of economy. With the amendment, legislature has bestowed powers to the Central Government to notify the funds. However, there are no such funds notified by the Central Government so far. As such, no exemption as of now can be claim u/s 54EE. There were lots many taxpayers who were expecting the funds to be notified but end  up paying taxes.

Though option to save tax is provided in the Act by section 54EE. But nothing is do at ground level to enable taxpayer to actually utilize it. At least, Status update on 54EE by the Government could provide relief to the taxpayer. They can plan their transactions by exploring alternate tax saving option or can defer the transaction or will enter in to the transactions with the upfront clear mindset of paying tax.

I have purchased a flat for Rs. 32 Lakh & residing in it. Please tell me
if I can take some tax benefit towards maintenance of house, tax paid
etc. If yes, under which section and procedure of claim. [Gurudas-gcmaji@gmail.com]

For the self occupied house property, no deduction is admissible towards tax & maintenance charges paid.

Stamp duty & registration charge paid is eligible for deduction u/s 80C subject to common overall cap of Rs. 1.50 Lakh. Further, the same can also be considere if any taxpayer is investing in the house property. To claim an exemption u/s 54 or 54F. Payment in cash does not bar the claim in either case.