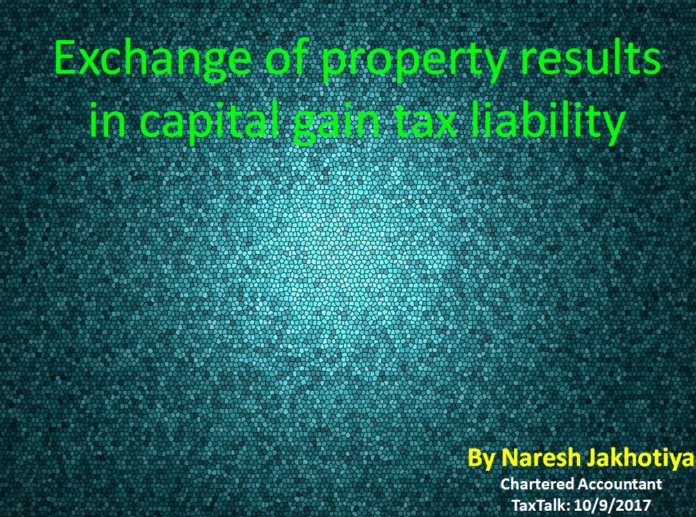 My father co-owns a plot with his brother. A builder has approached for development of it. He is ready to give certain sum and 3 flats in exchange.

Some more facts are:

1) Father and uncle own only one house each in different cities currently.

2) The uncle buy another flat this financial year which is under construction and possession expect next year (Agreement is do though).

“A taxpayer may engineer his transactions to minimize taxes, but he cannot make a transaction appear to be what it is not”- Irving Loeb Goldberg

Though transactions may sound simple from the commercial angel, it is not so from the income tax point of view. The complexity and tax implications need to be understood beforehand as stitch in time saves nine.

The capital gain liability arises whenever capital asset is transferred & is irrespective of the consideration whether received in cash or in Kind.

In short, against transfer of certain share of land in favor of developer, land owner would be getting construct flats. There is a misconception amongst taxpayer as most of them believes in “no cash-no tax”. It is not so. Tax liability could arise even without involvement of any cash elements in the transactions. In the present case, even if the land owners are not getting any amount in cash, still the transactions could result in income tax liability.

Reason: It is exchange of property whereby share in the land is exchang against the construct flat. “Exchange” of property results in capital gain tax liability. The taxation of such transactions is complicat affair. The most important mute question here is the “Year of taxability” of the transactions. There are no set guidelines as to the date, Year of taxability, the manner of ascertainment of the capital gains. In the hands of the owner in such cases (whether on completion of contract or on transfer of undivided interest to the Builder or prospective flat owners before the completion of construction).

The capital gain tax liability arises in the year in which “transfer” took place. Under the Income Tax Act-1961, transfer includes “any transaction involving the allowing of the possession of any immovable property to be taken or retained in part performance of a contract of the nature referred to in section 53A of the Transfer of Property Act, 1882” [Section 2(47)(v)]. Effectively, any transaction which allows possession to be take over or retained. In part-performance of the contract would come within the ambit of “Transfer”. So, if the land owners have granted the possession to the developer not in the capacity of buyer but only in the capacity of developer. Even then it may be treat as Transfer u/s 2(47)(v).

With above point in mind, two probability as to the year of taxability of such transaction could be the year in which (a) the Development agreement is sign or
(b) construction is complete and Flats are hand over back by the builder to the land owners.

Coming to the specific issues rais in the query, it may be note that:

Drafting & planning would play very crucial role in determining the ultimate tax liability. Timing, consideration & taxability would depend upon multiple factors like the terms, conditions & stipulations etc in the Development Agreement & various other individual issues of the taxpayer.  Generalized reply may not be possible in such cases. However, above brief discussion would certainly help the land owner to take required safeguard while entering in to development agreement. In view of the complexity of law & heavy stake involved, readers are advised to obtain individual professional advice before entering into such transactions/ agreements.